The Rod of Ruin

THE ROD OF RUIN

Weapon: The Rod of Ruin is a +1 Quarterstaff, which functions as a staff, wand or rod for implement purposes.
Enhancement: Attack rolls and damage rolls
Critical: +1d6 necrotic damage

The Rod of Ruin 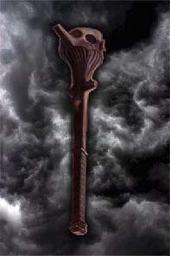